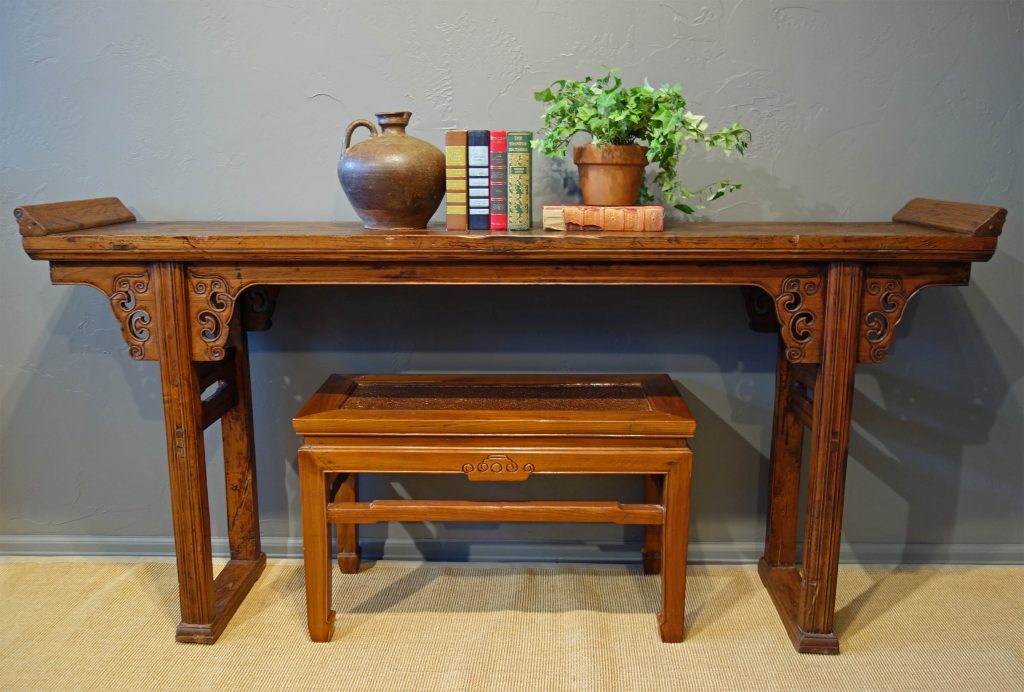 This altar table is constructed in the traditional mortise-and-tenon method.  It consists of a top with a floating panel (to adapt to fluctuating climate) in the middle, “water-stopping” molded edges, and a molded everted flange at each end.  The top is supported by molded recessed legs ending on base stretchers.

The decoration reflects a cultural heritage and conservative preference of the Shanxi people of the region. The straight beaded-edge apron ends with spandrel-heads pierced with carvings of stylized “ruyi” and cloud forms, which together symbolize a wish for harmony, happiness and good fortune.  “Ruyi” is an age-old Buddhist symbol throughout China but especially in Shanxi as Northern Shanxi has been associated with the earliest transmission of Buddhism from India during the Han dynasty (206 BC-220 AD).

This table has a ‘Taohuan’ panel set between each pair of legs.  (The use of taohuan panels is commonly associated with an early traditional style found throughout China).  The taohuan panels here have raised borders with a lobe at each end and is set recessed about half-way up the legs between two stretchers with convex “bamboo” molding.  The double “candle sticks” molded legs are set on base stretchers.  With so much fine decorative details, this table was likely made for a Qing literato.  As the design on each side is identical, this table can be placed floating in the center of a room or against a wall in a reception hall.

This table shows patina of old age.  Traces of original dark lacquer remain on the wood surface.  The top shows at places weather-worn “snake-skin” scarification and small burn marks, in character with an aged altar table.  Small imperfections give antiques character, making them more interesting as cultural objects which have lived and been well used.