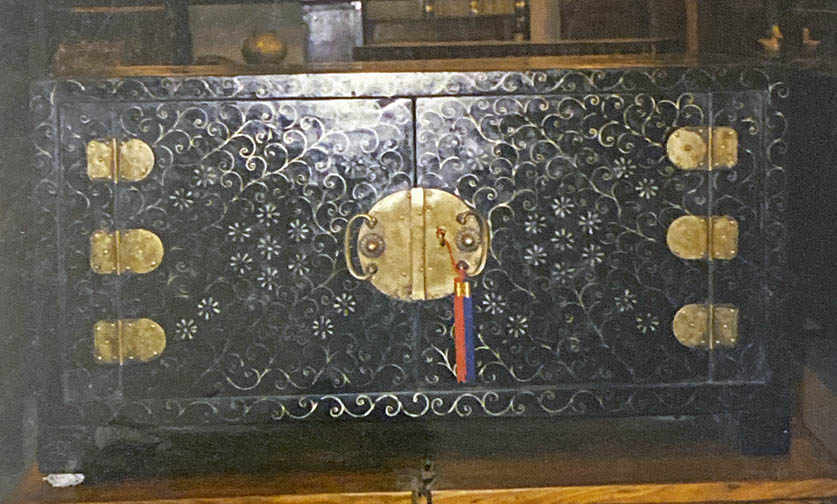 A Safe Chest was a very important piece of furniture for a Korean upper-class family as banks were not in existence at that early period. It would be placed in an inner room attached to the main heated floor room of the house, the “anbang”, where the family treasures were kept.

This chest is painted with black lacquer over zelkova wood. It is decorated on all sides except the back with clusters of flowers inlaid with sharkskin. The flowers are dispersed on twining reverse twisted brass wires. The pair of doors in front has a big round yellow-brass lock-plate with a pair of double-hook handles. Fitted on the plate between the hooks is a brass flower blossom motif that is often used as a nail hole cover but here is used as an ornament. A keyhole on the lock-plate indicates this safe is locked by a key. The hinges on this chest are big and of eye-catching yellow brass. The pair of doors opens into an interior at one time completely lined with paper but now, with age, almost all is torn off, revealing the rough-grained zelkova wood underneath. Zelkova is a tree not well known in the West but was highly prized in Korea as well as Japan in olden days for its density and durability, so it makes sense for a safe to be made of this wood. The bottom of the chest is attached to a wood block on each side as legs to lift it off the heated “ondol” floor upper-class houses were usually fitted.

This chest was found after the Japanese Occupation by an American missionary doctor who was invited by the government to go to Kanghwa Island, a political prison colony for the Kingdom of Korea, to treat the sick and the dying. He was allowed to take away belongings taken there by the exiled as the ruling scholar/official class did not care for anything the prisoners took there. For his humanitarian work, the doctor was honored with Korean citizenship. He lived the rest of his life in Korea. This chest was later passed on to a Korean {Professor of Korean History and Antiquity who certified this safe as quite rare.