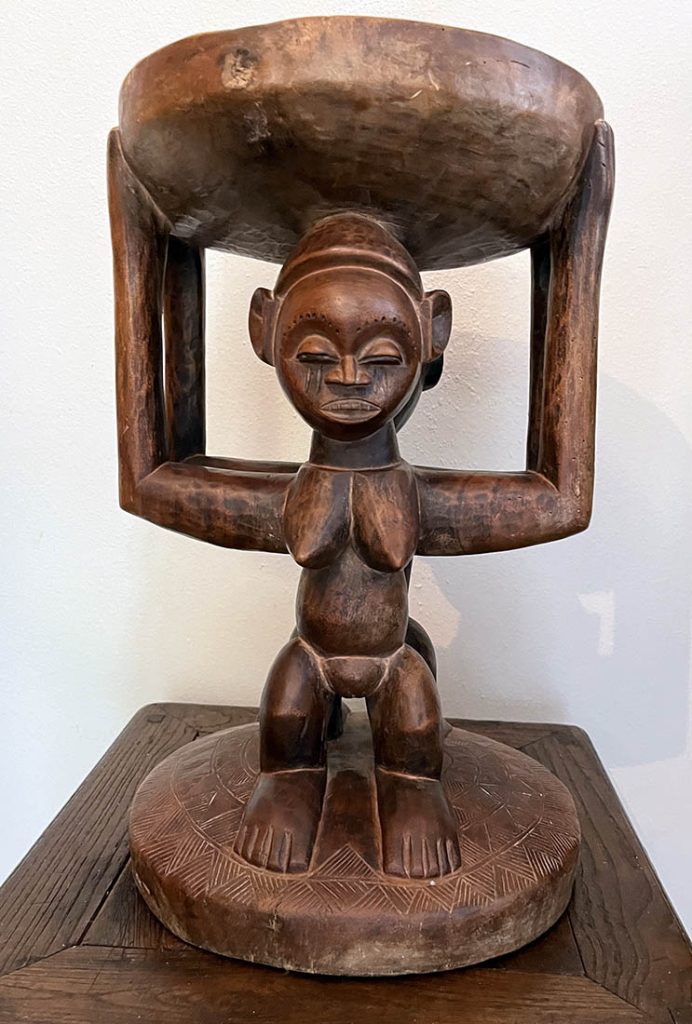 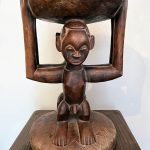 In historic times, stools were used as thrones by Luba kings and chiefs for investiture rites and other important ceremonies of state. The sculpted stool expresses the most fundamental precepts of power and succession to a dynasty.

A sculpted stool like the present one, with both the male and female is unusual. Rulers were primarily male, yet their emblems always depicted female form because women were considered by Luba people to be the most effective magnets for spirits that inhabit sacred sites, and their presence in some form is an allusion to the fact that after death a Luba king was incarnated by a female spirit medium that guarded the deceased king’s spirit and preserves his memory for posterity. By feminizing their emblems and object of power, male rulers ensure that the spirits will remain in close range to comfort, protect and empower the community and the kingdom. 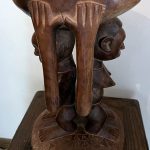 This stool is carved from light-colored wood, each figure has similar highly stylized form, with extremely short legs, exaggeratedly big feet planted firmly on a substantial disc-shaped stand carved with circular rows of geometric design, and a pair of elongated arms supporting a thick round seat. The head is rather big in proportion to the body and extremities. It exhibits clearly defined features. The jutting forehead has arced dotted holes as eyebrows. The concaved face has two deep vertical scarification lines on each cheek, below protruding heavy-lidded eyes. The short nose flares prominently. The mouth is ajar and shows a row of upper teeth. The rather big ears are D-shaped and stand out below a clear-cut hairline above a high receding forehead. The hairstyle on both figures is rather plain, with the crown clearly shown to support the seat. The figures show their genitals, with the female showing prominent breasts. This fact indicates that the stool was made before European missionary days which began about the latter part of the 19th century. The patina on this clearly hand-carved stool is excellent. It is preserved in this condition likely because as an important ceremonial object, it was rubbed with palm oil and because it was preserved as a receptacle for the king’s spirit rather than as a functional object.