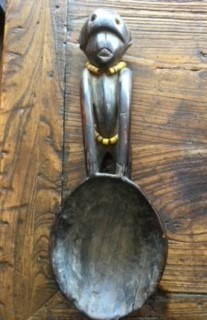 Spoons, in African culture, served a wide range of purposes, from the mundane to the sacred. In regions of the Ivory Coast, ceremonial spoons were sometimes rewarded to women as a tribute to their hard work and generosity in providing food to their families and guests. The spoon often has as handle, the carving of a head or a body bearing the likeness of its owner as an honor insignia. A male figure sculpted on the handle was rarely produced and virtually only in ancestral context.

The spoon here shows a standing male figure as its handle. It is sculpted so finely and decorated with beads to denote his high rank, must certainly have been retained for exclusively ritual purposes. It would be kept alongside a ritual dish to be used in sacrificial or other ceremonial contexts. The spoon would have involved in the stirring, serving, and scattering of medicines and the preparation of food for use on ritual occasions such as circumcision, marriage or the building of a grave or a house. These activities are closely associated with establishing crucial relationships between the living and the ancestors, which is pivotal to ensuring the vitality of village life, and they entail male participation.

The creation of figurative work for ceremonial and sacrificial purposes is regarded in tribal villages as a sacred occupation. Specialists are rare, so it follows that figurative ceremonial spoons are quite rare and are valuable possessions by their owners. Some healers and their followers own and guard their own ritual spoons to the extent that they never part from them, even when they go on trips.