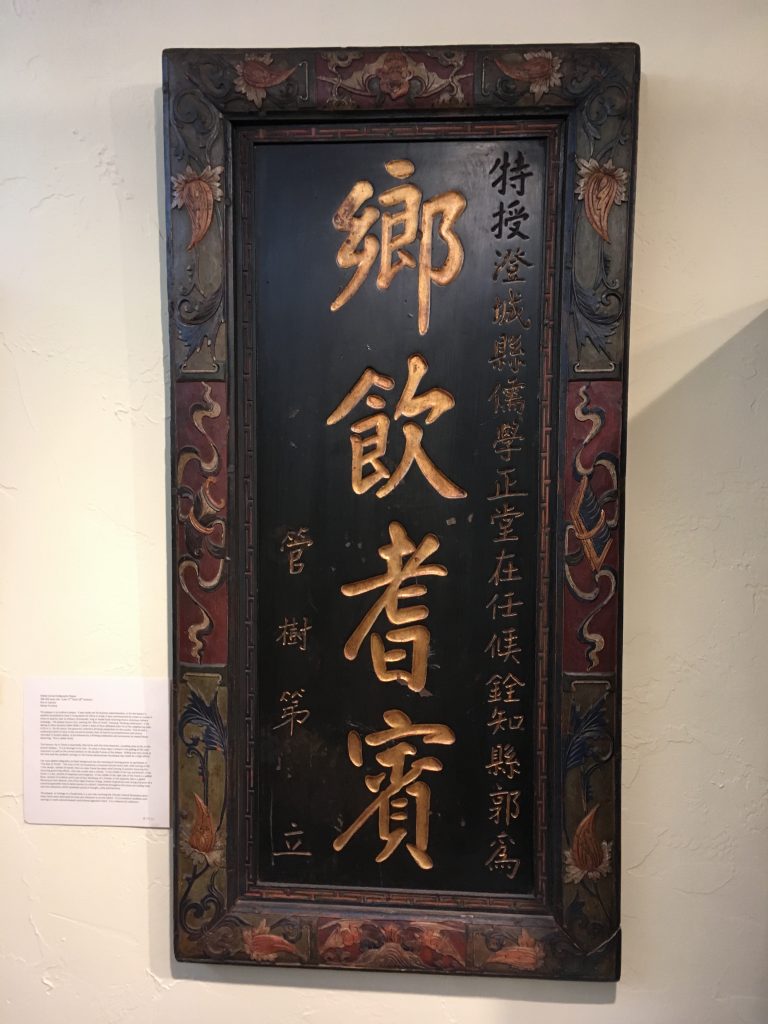 This plaque is no ordinary plaque, the kind done to advertise the establishment of a business.  It was commissioned by a township or province in China in early 18th century to laud its ruler, a feudal lord, returning from a victorious military campaign.  The plaque honors him, evoking the “Rite of Yinzhi” ( meaning “drinking celebration”), a rite dating to Zhou Dynasty (1046-256 B.C.) when a duke of Zhou defeated Duke Yin of the neighboring state of Qi.  On his return, the lord ordered a drinking celebration for the township.  First, he had a celebratory drink of wine in the ancestral temple by himself; then he had his accomplishments and victory recorded in temple tablets, to be followed by having his subjects joining him in a drinking celebration and participating in ceremonies rewarding those deserving.  This is called ‘Yinzhi’.

This famous rite in China is essentially referred to with the third character, sounding same as Qi, on the present plaque.  It is a homage to its ruler.  Its value in those days is shown in the heavy gilding of the Chinese characters as well as the carved symbols on the double frames of the plaque.

The gilded calligraphy on black background has the meaning of inviting guests to participate in “The Rite of Yinzhi”.  This panel is first surrounded by a recessed narrow frame with relief carvings of the key-fret design, symbol of infinite wealth; then an outer frame has deep relief carving of symbols honoring the returning high official, who was always also a scholar.  In the middle of the top and bottom of the frame is a bat, symbol of good fortune and longevity.  In the middle of the right side of the frame is a gilded book, symbol of erudition, one of four Attributes of a Scholar; in the opposite side is a gilded Rhinoceros Horn Beacon, one of the Eight Precious Things, symbol of good luck and strong character.  Scattered throughout the frame are trailing vines and lotus blossoms, which symbolize purity of thought, unity, and harmony.

This plaque, as homage to a feudal lord, is a rare relic surviving the Chinese Cultural Revolution when many items were destroyed to erase any reference to an old culture. It is in excellent condition with deep relief carvings in multi-colored lacquer and mineral pigments intact.  It is not only a rare cultural relic, it is a beautiful work of art.