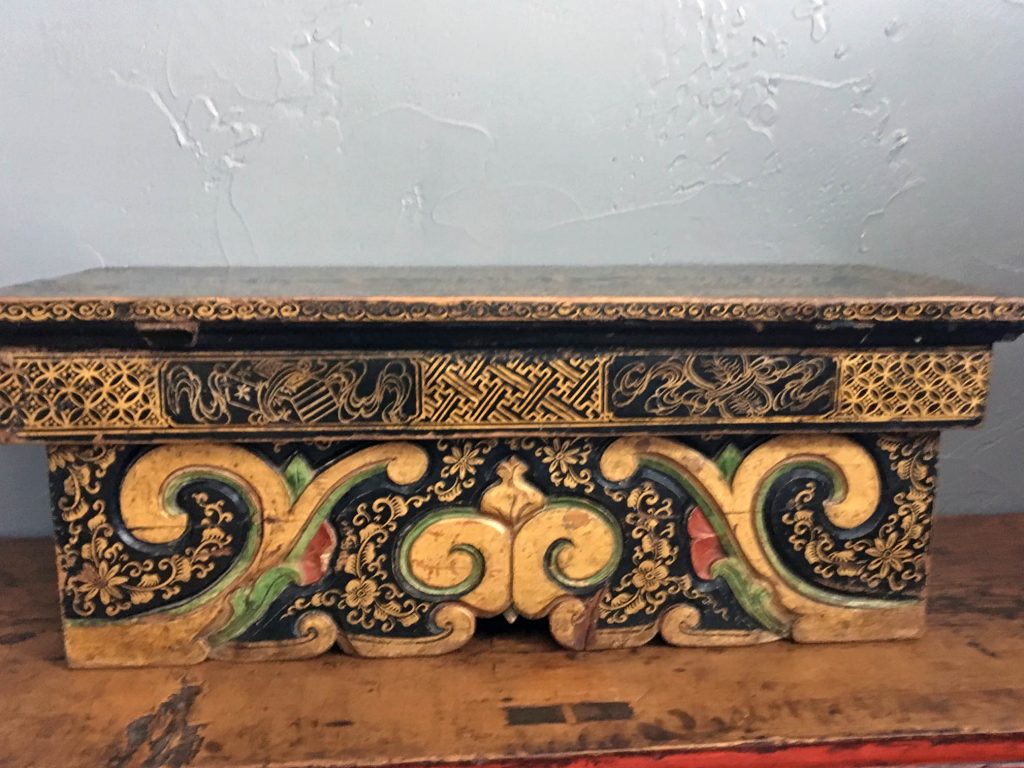 Small folding tables (Tepchog) were perhaps one of the earliest of Tibetan furniture.  The Tibetans have traditionally been herdsmen, moving from place to place for good pasture for their animals.  They normally carry objects in bags made of animal skin, and occasionally various religious items and a small folding table with them so when they stop, they could set up an altar for worship or to support their never-ending yak butter tea, sitting on the floor or cushions.  The tepchog is ubiquitous in Tibet.

This present small folding table is a classic tepchog, consisting of a solid top and three hinged side panels which allow the table to be folded flat for carrying or for storage.  It is rather rare because of the way it was made and for its painted decorations.  Since only softwoods such as pine could grow on the high plateaus of Tibet, there was no tradition of fine hardwood furniture as there was in China.  What they had were all hand-made and could be rather crude.  The emphasis was not on wood or method of construction but on colors.  This tepchog, however, shows a highly traditional Chinese method of construction usually found on fine hardwood tall tables and chests of the early periods.  The three-sided apron below the top board shows dove-tailing corner construction, a detail hidden by painted decorations over it and can be detected only by careful observation.  Underneath the top panel and the elaborately decorated wide front leg panel are tenoned crossbars inset into the wood, with tenon ends showing.  Crossbars were usually added to a long table to add strength to the table in order to support a variety of heavy items; it is quite unusual for a small folding table meant to be carried around to be so complexly made.

Generally, the top of a folding table is plain, with the sides usually decorated with carvings or paintings.  This table stands out for its top panel with significant motifs and highly gilded paintings.  Prominently painted are two sinuous fire-breathing dragons, each in a medallion set among twining flowers and vine.  This central decoration is framed first by an angular wandering-clouds design, and then by a wide border of magnificently gilded twining floral design on a black background, border designs resembling 14th and 15th centuries Chinese designs on porcelain and other artworks.  The panel edge is painted with a swirling clouds pattern.  In Tibet, dragons date back at least to the early royal period, from the 7th to the 9th century and represent the Heavenly King.  Together, these designs mean a wish for heaven to grant health, richness, and good fortune.

Below the top panel the three-sided apron has gilded paintings representing a mixture of what in China is famously known as The Eight Precious Things and The Attributes of a Scholar, on four Taoyuan (narrow, horizontal-shaped) designs. In front are The Books (erudition) and The Yarrow (medicinal plant with divinity power); on one side is The Gourd (long life) and on the other side is the Pictoral Scrolls (artistic talent, love of truth).  These items are bound by ribbons with ends flying, meaning a wish for their hopes to rise to heaven and be granted.  These Taoyuan designs are accompanied on their sides by brocade coin designs and in the middle of the apron by an auspicious key-fret-swastika linked motif which in Buddhism is homophonous as “wanzi” (ten thousand) meaning unlimited, eternal.

All three legs of this table have relief carvings of the “ruyi” (grant all wishes) motif.  Each side leg has relief carving of a lotus sitting on top a ruyi, set on a reserved black background with gilded twining flowers.  The large ruyi in front has a lotus pod sitting like a crown on top a throne, with thick ruyi branching ends like septors arching over it.  These ruyi pieces are gold-leaf painted which has scraped off a little in places due to aging.  They are set on a reserved black background with gilded twining floral designs.  The display on this small table is spectacular.  Its richness could only mean this Tepchog was created for someone of high status and not to be casually carried around by any tribesman.

Antique small folding tables are extremely rare today because they have not survived well due to their being portable so were put in hard and constant use.  Also, since the Chinese occupation, high tables and chairs made them obsolete.  At any rate, Tibetan antiques are banned from leaving the country today, especially one like this tepchog with royal bearing.  Minor cracks on the wood are inevitable on aged pieces.