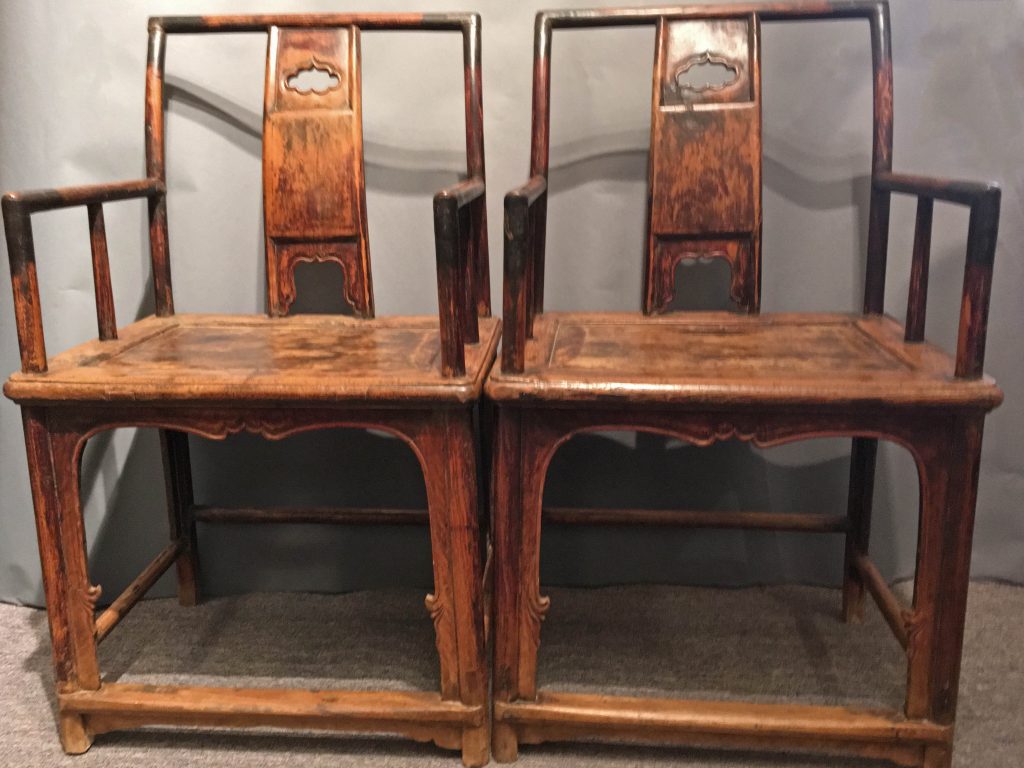 This type of armchair is given the name ‘southern official hat armchair’ by the guru of Chinese antique furniture Wang Shixiang.  The pair here displays indisputable characteristics of what constitute a Ming chair.  Typical of Ming chair is the backward slope of its hind posts and backrest, as well as the rounded contour of its supporting frame member.  Ming furniture often is lacquered with fabric underlay covering the entire surface, but here it is restricted to the arm and hind post joints, where strips of fabric, having been soaked in a mixture of thickened lacquer, were pasted over the joints, where movement might otherwise cause cracks to develop.  This technique, termed ‘jiachu’, was commonly employed during the Song dynasty.  To produce a smooth surface on the wood, coats of lacquer were thinly applied with cotton wadding.  Red lacquer was used to highlight the raised beading tracing the ruyi-shaped decorative opening on the top and bottom panels of the frame tri-sectional backrest, as well as on the front and side aprons below the seat.

The chair is fitted with a slightly beveled seat panel, which is joined to the seat frame in the traditional mitered, mortise-and-tenon method.  The outside edge of the seat frame is convexly molded and beaded.  The seat bottom is reinforced with two stretchers which have long tenons penetrate through the seat frame to the surface.  The beaded front and side aprons are arched and cusped, with the front apron curving down the inner side of the legs all the way to the foot stretchers as spandrels decorated with hooked flanges.  On one of the chairs, a protective iron plate is wrapped around the connection of the armrest to the hind post and is secured with hand-hammered iron nails.  Some Chinese characters march down the back of each chair but are too faint with age to make out what it means.

This pair of chairs shows significant age and use but is well restored. The wood, with its dark lacquer faded with age, never-the-less has a rich glow to it, giving it a wonderful patina.  With its many Ming characteristics shown, it is a valuable specimen as to how an early period chair was made.