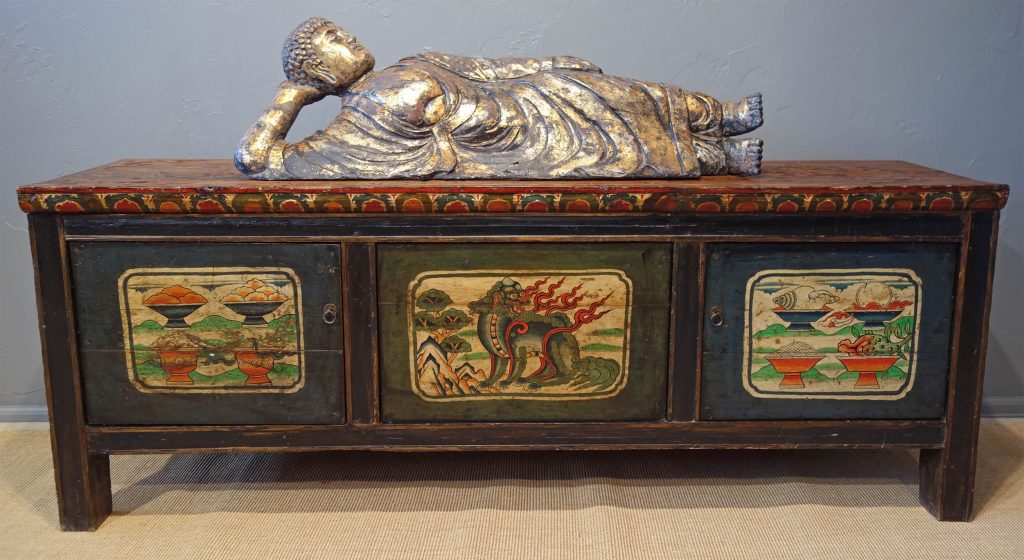 Tibetan low tables and chests with Buddhist symbols have a long history, dating stylistically to the 15th century.  The furniture is known to be developed in Buddhist Central Asia and transmitted to Tibet over the Silk Road through trade.  Wherever their beginning, the pieces that survived are now very rare.

In Tibet, the general population lived a nomadic life in tents.  Low tables and chests painted with Buddhist auspicious symbols were used in a monastery, in the private home of lamas or that of persons of high religious standing.  Inside monastic halls and chambers, monks generally sat on relatively high cushions and benches.  This kind of chest was used to store books and items related to religious observance.  On the top, an incense burner, a yak-butter lamp, and a dorje (an object with thunderbolt motif, which is a religious symbol representing the indestructible state of enlightenment) would be placed, and the surface would provide a place from which to read the Tibetan wood-covered religious books, an important activity in Tibetan religious life.

There are three door panels to the interior of this chest.  The center panel depicts a fire-breathing dragon.  Dragons are usually associated with wealth and status but on Tibetan furniture, they are frequently portrayed guarding the flaming jewels or the wheel of the Dharma (teaching of the Buddha).  The other panels in front, and on the sides, have paintings of bowls of offerings to deities.  Below the top plank is a painted border of lotus petals, signifying purity of thought.  The table-top bears incense burn-marks and the paintings on the side panels faded due to age.  Like almost all authentic Tibetan antique furniture, especially ones used in religious settings, traces of grease marks show on the panels as in Buddhist Tibet, yak butter lamps burned day and night, leaving grease marks everywhere after a long period of time. The one on painted furniture is very hard to remove as too much rubbing can ruin the paintings and devalue the piece.  These grease marks actually prove the piece of furniture is an authentic antique.

Original Tibetan antique furniture is rare and valuable today because so many were destroyed during the Chinese Cultural Revolution and because later Tibet banned any antique furniture, especially of religious significance, from leaving the country.  An authentic relic like this is a treasure to collect.  (Reclining on top is a wood antique reclining Buddha).