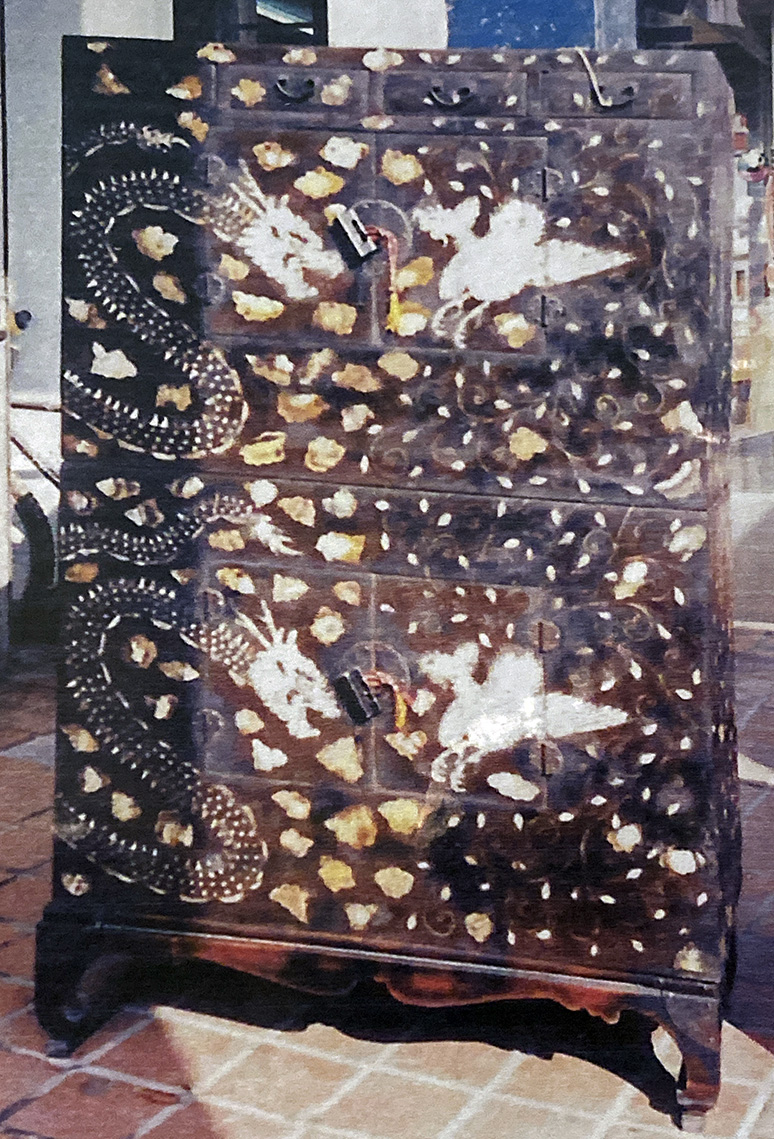 This magnificent two-unit stacked chest is very rare and valuable as in ancient Korea, the five-clawed dragon emblem represents the king, and it could only be used by a member of the royal family.  The figures of the dragon and phoenix together represents the king and the queen, head of the royal household, so the chest was meant to be placed in the imperial palace.  Inlaying the figures with very rare and expensive sharkskin, mother-of-pearl, and tortoise shell could only be afforded by royalty.

On each chest, the head of the dragon is inlaid with mother-of-pearl and its body with sharkskin, outlined with reversed twisted yellow brass-wire.  The writhing body twines around from the front panel to the side, up to the top panel, then back up front showing five claws.  The phoenix is inlaid with mother-of-pearl, with extended twisted wire going around to the side and top panels, representing wispy tail feathers.  The pair is shown frolicking among petaled twines and clouds, represented on the front, sides, and the top by petals of sharkskin and larger size tortoise shells.  Tortoise shell signifies long life and the passive-negative force of the universe, the female.  Thus, this beautiful chest, a ‘nong’ in Korea, would have been placed in the lady’s part of the royal palace.

The top chest has three drawers below which is a storage compartment opening into it by a pair of small doors in the middle of the chest.  The bottom chest is image of the top one in construction but without the drawers.  The metal fittings on these chests are all round and made of iron, conforming to simplicity which Buddhism and Confucianism favor.  These stacked chests sit on a detached stand with a curvaceous lower edge and brass corner braces, ending gracefully with short, curved legs resting on side base-stretchers.  The back of the chests shows worn pieces of paper over what looks like paulownia wood.  It makes sense to have storage units constructed with this wood as it is well-known to have moisture and insect repelling qualities suitable in a country known to have vast temperature changes.

This stacked chest was found after the Japanese Occupation on Kanghwa Island, a political prison colony for the Kingdom of Korea for two thousand years.  It was recovered by an American missionary doctor when he was invited to go there to treat the sick and the dying.  He was allowed to take away any furniture the exiled took there as the ruling scholar class did not care for furniture.  For his humanitarian work, the doctor was honored with Korean citizenship.  He lived the rest of his life in Korea and later passed the chest on to a Korean Professor of Korean History and Antiquity who certified this chest as rare.