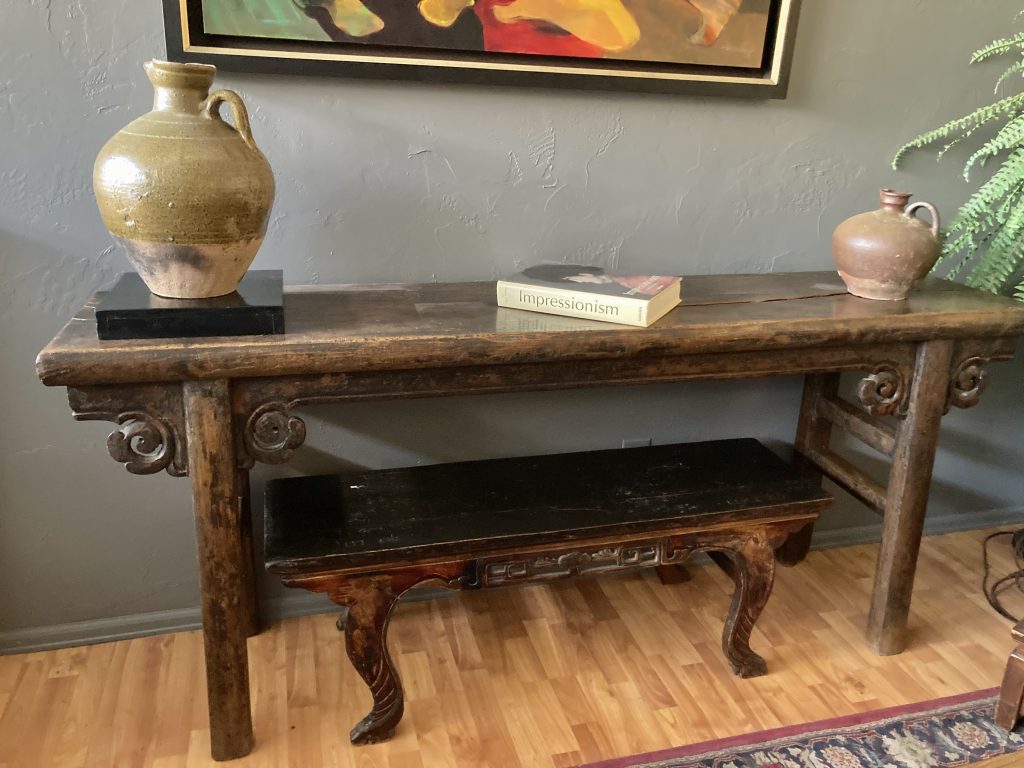 In China, painting tables were prized possessions of the scholar-artist because he created his masterpieces on them.  Their preference at that early period was simplicity and naturalness because the primary function of furniture for them was daily necessities.  These scholars were also adherents of Buddhism and Confucianism, thus the standard of furniture for them was simplicity, structure, balance, and dignity.

This pair of tables Has a simple profile but displays understated elegance.  It is rare not only because of its age but also because it is made of Sophora, a wood of choice by literati for furniture-making due to its density, resistance to insects, moisture, and warping.  The slow growth of the tree and over-use of this wood, however, caused its demise as furniture construction material by the end of the Ming period.  As a result, not much furniture made of this wood survived in good condition through the ages to reach contemporary market and known by antique dealers and collectors for its rarity and cultural worth.

This pair of tables is constructed in the traditional mitered, mortise-and-tenon method.  Each top is made of a long slab of Sophora and has no everted ends, making the pair suitable as both painting and altar tables. The front and back of the table are mirror images so it could stand in the middle of a room.  The recessed aprons are plain but rimmed with beading and end with a cloud-head or “ruyi tou” (as-you-wish head) cut through the center by the leg to appear as spandrel heads.  The stout legs have a convex profile on the front face.  They are bridged by double stretchers of same profile.  The underside of the table has several traverse braces to support the long top panel.

The slab of Sophora at the top shows a long deep crack in the grain pattern.  It is characteristic of this wood to have some cracks when first cut but when dried becomes very stable.  When found in Shanxi, much of the original dark lacquer on the wood had faded to a grayish tint due to long neglect in some warehouse during the Cultural Revolution.  It was restored to its archaic lustrous beauty by cleaning and an application of the ‘lac’ from the lacquer trees that flourish in Shanxi.  This lac not only restored the luster to the wood but also helped to preserve the wood.

The pair survived in excellent condition no doubt due to the strength of the wood and having existed in a region relatively dry and guarded by The Great Wall nearby that prevented the region from infiltration of wars that destroyed many other area’s treasures.

(The Sophora has some historical significance because according to a 1961 chronical about China, “Imperial Peking:  Seven Centuries of China” by Lin Yutang, the last Ming Emperor, Tsungcheng, in 1643 hanged himself on a Sophora tree when he realized he was about to lose his kingdom).