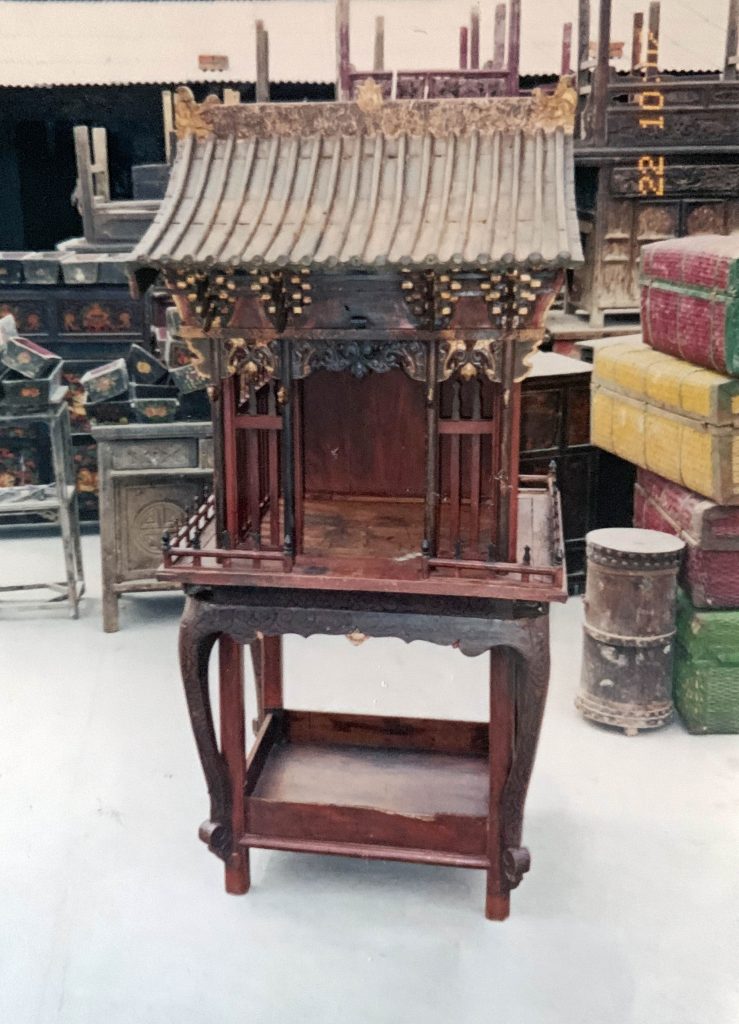 This shrine is red-lacquered, gilded, and decorated with paintings and intricate  carvings.  The structure is very complexly done.  It has a pagoda roof with gilded ornaments across the top.  It is fenced in on three sides with spear-headed slats, and the back with a solid panel behind which is painted a lively dragon with color now slightly faded with age.  The fencing in front has an opening in the middle, serving as entrance to the shrine.  Above the entrance and underneath the roof in front is a panel with four protruded intricate carvings of dragon heads.  Below this panel is an apron on which is an open carving of a phoenix with wings spread wide, with four dragon heads on the side sticking out from four round posts guarding the entrance to the shrine.  Each corner of the shrine is supported by a sturdy post which tenons through a deck on which the shrine sits.  The deck has a walkway and balustrade on four sides, with an opening in front for access to the shrine.

The deck on which the shrine sits becomes the top of a four-sided table with a waist from which painted aprons arch out and naturally curved into cabriole legs gracefully tapered into long scrolled feet.  This table is suspended on another structure with straight legs which are the continuation of the corner posts of the shrine above which have tenoned through the deck to become legs supporting the table with cabriole legs.  The inside legs support a walled shelf situated a few inches off the ground for ritual offerings.  This very complexly designed shrine is a rare Ming Dynasty relic which managed to survive intact.