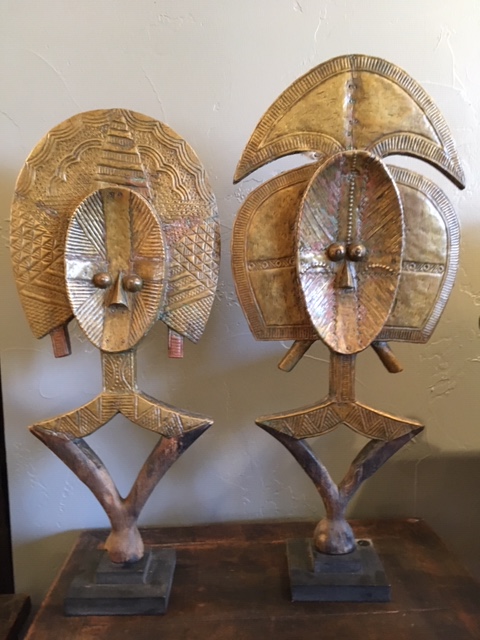 Eastern Gabon/Western reaches of the Congo

The Kota tribe practices an ancestral cult known as ‘Bwete’ that was at the center of a system of beliefs, rites, and ancestral worship.  At the death of a chief, parts of his body would be decorated with metal rubbed with magical powder.  These relics would be kept in woven rattan baskets surmounted by reliquary figures in wood plated with thin copper or brass strips.  These bronze-plated reliquary figures were regarded as sacred and were placed in temples in a village, or behind a chief’s hut where they were expected to protect and benefit the families.  Only chiefs get the metal treatment as metal was very expensive in that part of the world.

Kota reliquary figures generally consist of two figures, one larger than the other.  The larger represents the founder of the village, a male, and the smaller a descendant, a female.

Old and authentic Kota reliquary figures are rare due to the arrival of missionaries who confiscated or destroyed them.  The ones survived are either in museums or in private collection.  This pair came from a collector who has direct contact with tribal natives in Africa who would only trade with collectors they know and trust and not tourist.  (A pair similar to the present one has been on view in the African section of The Metropolitan Museum in New York).