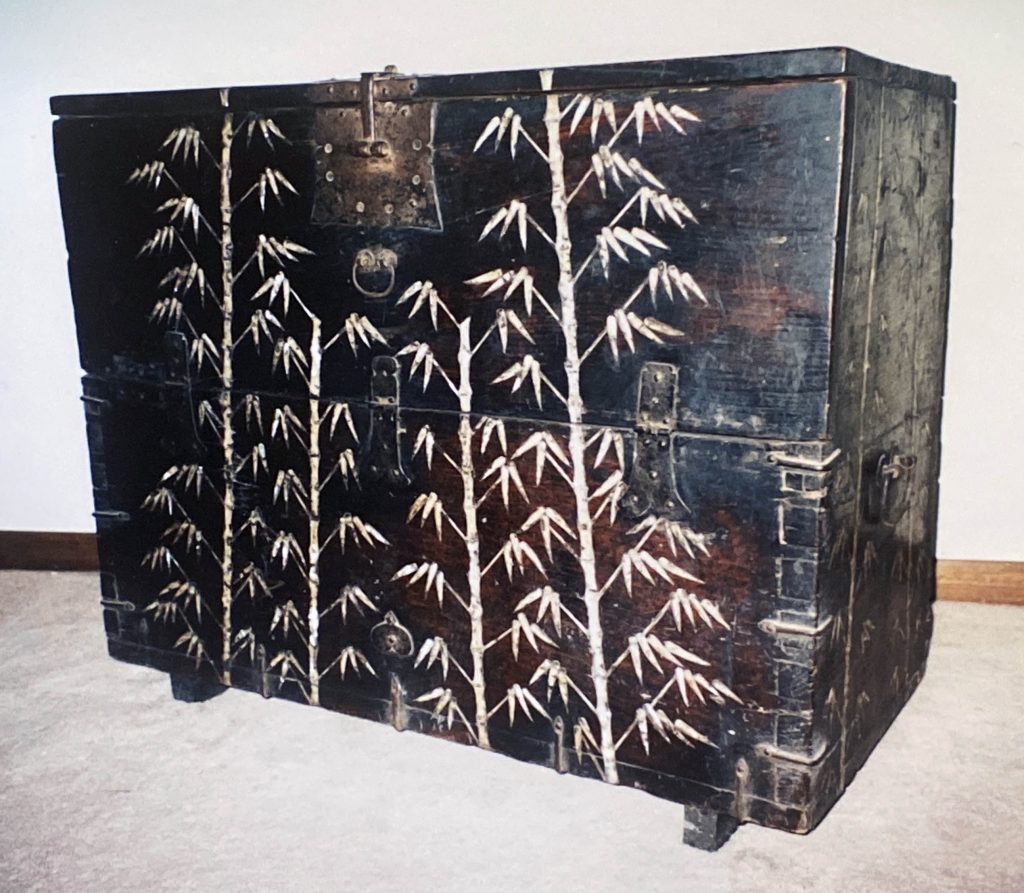 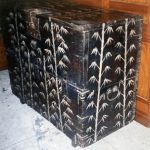 This chest is a highly valued piece as it is made of solid chestnut or perhaps zelkova wood, either of which is a highly prized wood in Korea for its density and durability. The bamboo design is inlaid with costly mother-of-pearl and is done on all the noticeable surfaces of this chest. Bamboo signifies “loyalty to the King”. A chest so expensively made must have been made for a member of the Yangban class (the land-owning aristocracy).

This kind of chest is known in Korea as “bandaji” for having a half door across the top half of the chest, opening out and downwards. The inside is not for storing blankets but for seasonal clothing or documents and manuscripts. Upper class Koreans of that period slept on an “ondol” system heated floor, wrapped in blankets. In daytime the blankets were folded and piled on top of a bandaji which in later period the West gave it the name “Blanket Chest”. This chest displays exceptional craftsmanship with the bottom half of the chest dovetailed at the corners and further secured with corner braces at the sides and the bottom. All the metal fittings are made of iron. This rather unimpressive metal was chosen to use on such a beautiful piece of furniture because the elite scholar/official class were adherents of Buddhism and Confucianism and favored iron for its purity and quiet strength. The chest sits on two boards to lift it from the “ondol” heated floor.

This chest was found after the Japanese Occupation on Kanghwa Island, a prison colony for the Kingdom of Korea for two thousand years. It was recovered by an American missionary doctor who was invited by the government to go there to treat the sick and the dying. He was allowed to take any furniture the exiled took there as the ruling class did not value furniture. For his humanitarian work, the doctor was honored with Korean citizenship. He lived the rest of his life in Korea. The chest was eventually passed on to a Korean Professor of Korean History and Antiquity who certified the chest as quite rare.