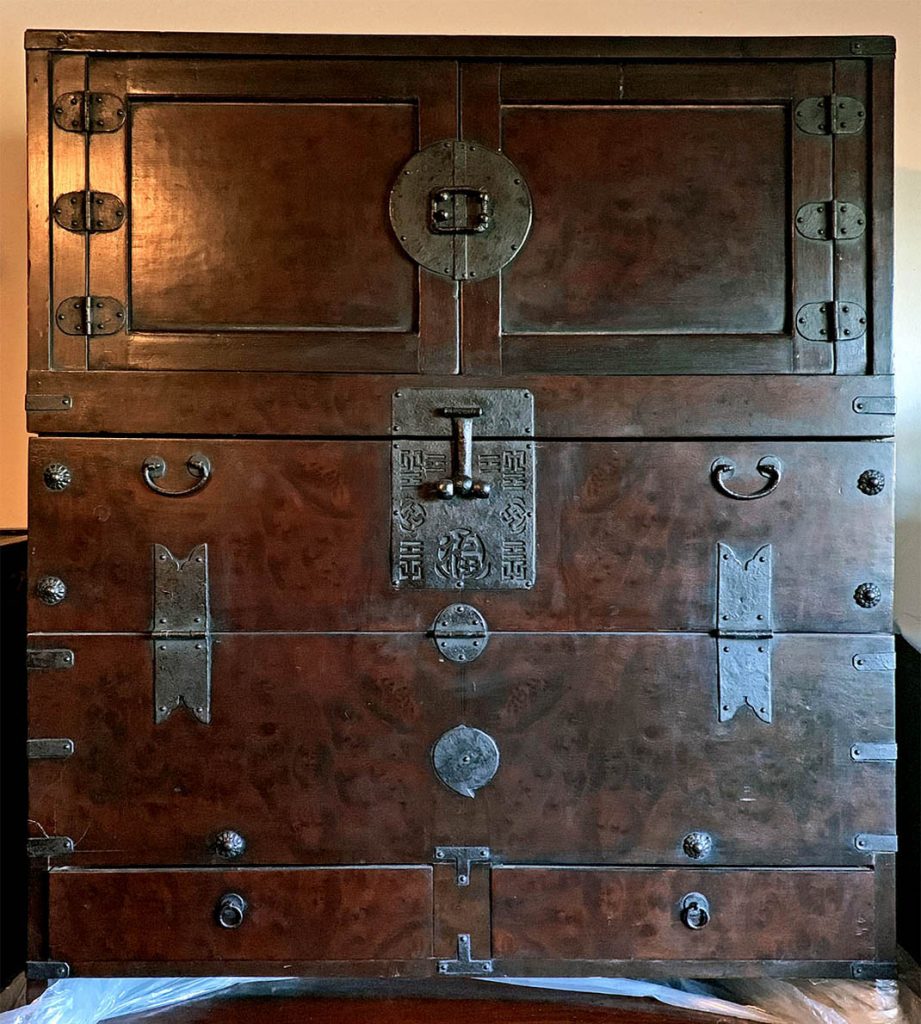 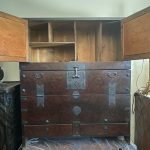 Cheon Chu City is known in Korea for having high quality antique furniture as it was where members of the “Yangban ” class and elite scholars congregated to prepare to take an open Imperial Examination, the passing of which guaranteed upward mobility.  This elite class of people could afford to furnish their residences with quality furniture.

This chest is unique in style and valuable for the wood used and the thick metalwork with Taoist motifs.  Its sides are made of chestnut and the front panels of pear wood.  Both are hardwood, sturdy, relatively crack resistant and have fine grains.  The pear wood panels show a burl-like pattern that gives the chest a very polished look, making it a beautiful background for showing off the distinctive metalwork decorating it.

The chest is also unique in that it is built with two distinct parts for two distinct usages, but both housed in one single frame.  The top part is a bookchest with divided compartments inside, and the lower part is a clothing chest (bandaji) with a drop-leaf door opening outwards and down, and two drawers at the bottom.  This mix-purpose construction is obviously meant for a scholar in temporary residence in the city.

The chest is valuable also because of the thick ironwork on it.  The humble iron is a metal preferred by Confucius-era scholars for its unpretentiousness and quiet strength.  The lock-plate on the bookchest is round and plain, and that on the clothing part is rectangular.   The rectangular plate covers both the bookchest and the bandaji.  It has a long tongue fastener stretching from the bottom of the bookchest to latch on to the bottom part of the plate on the top of the drop-leaf door of the bandaji.  The rectangular plate has several very important Taoist and Buddhist symbols.  On the side s are the Taoist “Baguo” trigrams of Yi Jing (I Ching), and the Buddhist “swastika” (eternal) symbol within a circle.  In Taoism, these are symbols of heaven and earth.  A Chinese “Fuk” (good fortune) motif is shown between two trigrams at the bottom of the plate.  The drop-leaf door has a small round hinge in the middle and a swallowtail-shape hinge on either side.  The most important symbol is a Taoist “t’aeguk” symbol below the round hinge.  It derived from the Chinese yin-yang, with Taois concept of eternal motion, that ‘change’ itself is unchangeable.  This symbol later became the symbol on contemporary Korea flag.  Iron dove-tailing secure the framework to the side panels, and nail pegs are covered by floral nail covers.  The spectacular construction and all these important symbols are what make this book/clothing chest a rare piece of relic.

This chest was shown at The Arts of Pacific Asia Show in San Francisco in 2004.  It was admired by experts for its uniqueness.  It is certified in Korea by a certifier approved by the government in the 1900s.