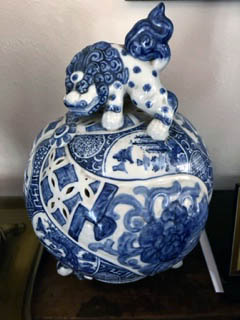 This incense burner is one of a pair given by Pearl Buck to Dr, Moffet, a medical missionary doctor from Chicago, living in Korea. Pearl Buck is the American winner of the Pulitzer Prize for Literature in 1938, for her novel “The Good Earth”. Pearl Buck’s parents and she were missionaries in China. It was about 1965 when she visited Korea to ask Dr. Moffet the best way to start an orphanage in China, as the doctor had devoted his life to taking care of the sick and dying, and had started many charitable organizations in his adopted country of Korea. She presented the pair of censers to Dr. Moffet and told him at the time the pair was antiques from China. Dr, Moffet’s adopted son, Professor Chung Bong Woong, a professor of Korean History and Antiquity, and one of only 13 government certified antique certifiers in Korea, found the burners after Dr. Moffet passed away.

To fully understand the value of this beautiful censer, it is important to understand the manufacturing of such a complex piece. A “Round Ware on the Wheel” was a very costly project. It involved many workers and artisans. The process began with having a group of workers to fashion a plain round vase on a potter’s wheel, then moved on to molding, cleaning, and polishing with a knife. The work was then passed on to artisans with specialized skills who, if necessary, would emboss the piece with relief and do openwork carving. When the work was done, the piece was filled in and washed clean again before the application of glaze. The ware was then ready to be fired in the oven and came out a piece of white porcelain. The work of coloring then commenced, with cobalt painted on the paste, then glazed and fired again. This is how an under-glaze blue-and-white porcelain round ware was manufactured. It involves lots of work and many specialists if it is a piece requiring relief work and many projecting and ribbed surfaces such as this censer. This pair is no doubt a valuable present.

The decoration of this censer follows the conformed canon of art of olden days: the design should be taken from the patterns of old brocades and silk embroideries, and the potter’s art be derived from forests and streams, with ornament themes supplied by natural sources. The prevalence of medallions, of the varieties of diapers, and the decorative themes on this censer can all be traced back to olden-day brocade designs. The relief patterns of waves and cloud-formations, and of the peony flower are also age-old, symbolizing prosperity.

This censer, with a globular body enhanced by variegated projections and relief surface, is supported on a separate base by three traditionally attired Chinese, and topped by a lively qilin, a mythical creature known in Chinese folklore as the son of the dragon, and a sign of nobility. It is a refined piece of porcelain, as can be seen from the delicate white paste shown in the interior of the body. A smattering of pale blue-green glaze on the white paste is a test color for the potter. The glaze of all Chinese porcelain is always rich in lime, which derives from the ashes made by burning a grey-colored limestone embedded with layers of fern. It is the lime that gives the characteristic tinge of green or blue but at the same time produces a brilliancy of surface and translucent depth never found in the harder glazes which contain no lime. The white surface of this censer has a tinge of blue.

This porcelain censer, given by a legendary author of Chinese life in China to another prominent missionary in Korea as a gift, is a very rare and valuable piece indeed. It should deserve a place in a museum!