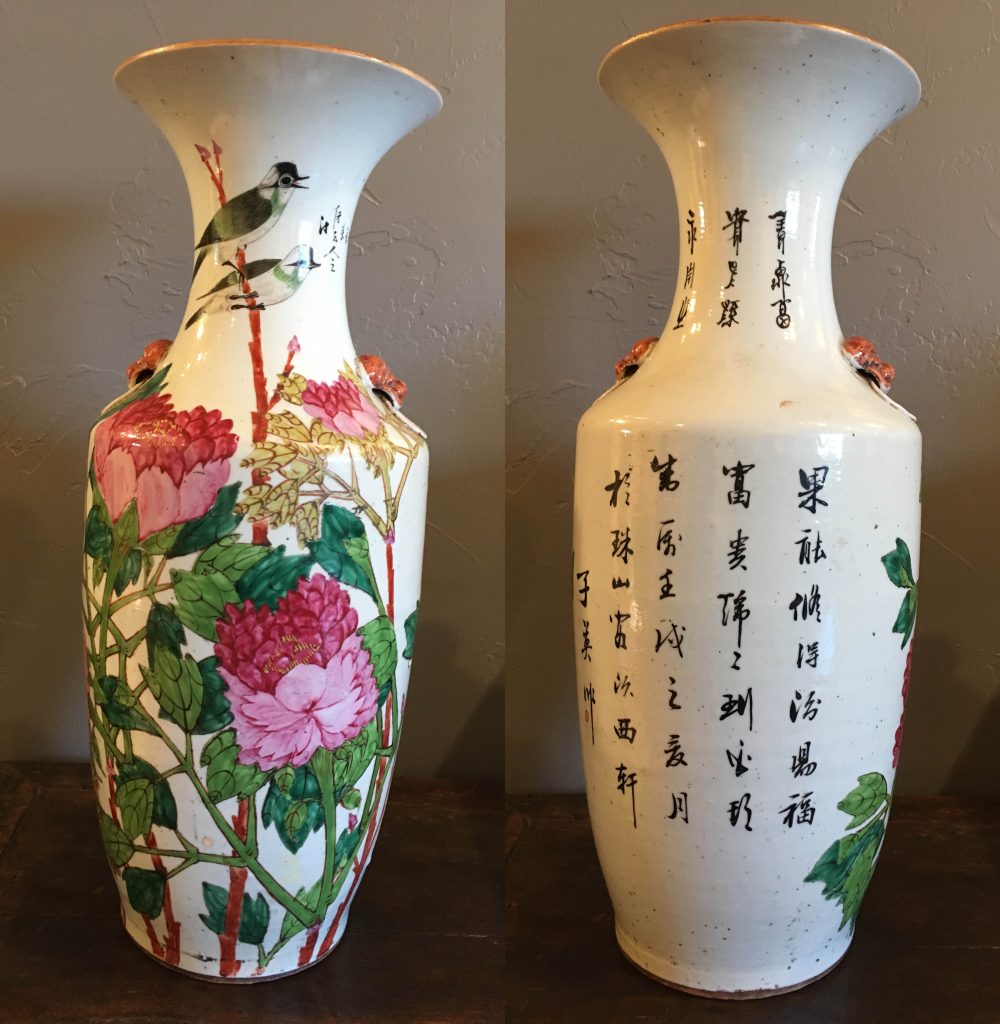 This porcelain vase has the brilliant Famille Verte enamel colors so famously used to decorate paintings on white-glazed porcelains of the Kangxi period (1662-1722).  The Kangxi period is noted for single colors used, meaning the individual primary colors were not blended to invent a different shade, but each single color could take on two or three tones to give vibrancy to a painted object.  Green in shaded tones occupies a conspicuous place among the characteristic colors (blue, green, yellow, red, and black) of this period, and the term of “Famille Verte” had its origin therein.  The inscribed poem is in the “cursive script” or “grass-hand” writing style, said to be invented by a palace eunuch of the first century to make quick writing on porcelains.  This style survived till the Qing Dynasty but shortly after disappeared due to the runny, abbreviated and contracted fanciful writing by scribes becoming too difficult for the uninitiated to understand.

On the present vase, the brilliant jade green takes on two tones on the mature leaves, with new leaves painted a soft yellowish green.  The peonies are vibrantly painted in two-toned red.  The artist brushed on the colors so thickly to create depth that the flowers and leaves look like low relief decorations.  The inscribed poem in cursive script is translated as: “You will have the luck of Guo Ziyi with fortune and wealth until your hair turns white”.  Guo Ziyi was a famous Chinese military officer and military strategist in the Eastern Zhou period.  He was immortalized as “The God of Wealth and Happiness”.  The signature, Ziying, is inscribed alongside the poem.  He was a famous ceramic maker who came to work in a palace workshop during the Qing period.

In China, a painting of flowers and birds symbolizes the renewal of life in spring; the peony also signifies wealth.  The inscribed poem inferring to Ziyi might just mean the artist borrowed part of a well-known poem to celebrate the renewal of life and the prospect of wealth.  A pair of orange hue handles in the form of lions’ heads biting a ring completes the decoration on the vase.  The bottom of the vase is not glazed, as is often the case with older specimens of porcelain vases.  A thin painted line in iron-red hue defines the rim of the foot, as well as the lip of the vase.

This vase does not have a seal mark at the bottom of the piece.  According to Dr. Stephen Sheldon, an English doctor for the British legation in China for many years in the 1800s who made ceramics his avocation and wrote many books on the subject, true seal marks on porcelains during Emperor Kangxi’s reign are rare.  The finest quality vases produced in the palace factory with reign marks were done by special writers and were usually distributed among the elite class, and a profusion of porcelain of every grade were made for use in the imperial court and for the royal family members to give away as gifts.  Many gift varieties without the employ of a special writer were often forbidden by the official in charge of the palace factories to have inscription of the sovereign’s name on the pottery; instead, the artist’s signature is attached to his painting or following the verses which accompany it.  It seems to be the case with this vase.  It is not uncommon for unscrupulous factory owners to make fake seal marks on their products to try get a better price from buyers, so a seal mark might not establish the value of a ceramic piece.  It is better to understand the fine points of pottery-making and then trust your own eyes before purchasing a piece of pottery.

This vase came out of China with a refugee who is a descendent of two generations of missionaries in China.  He conducted classes about ceramics and cloisonné.  This vase was part of his private collection.