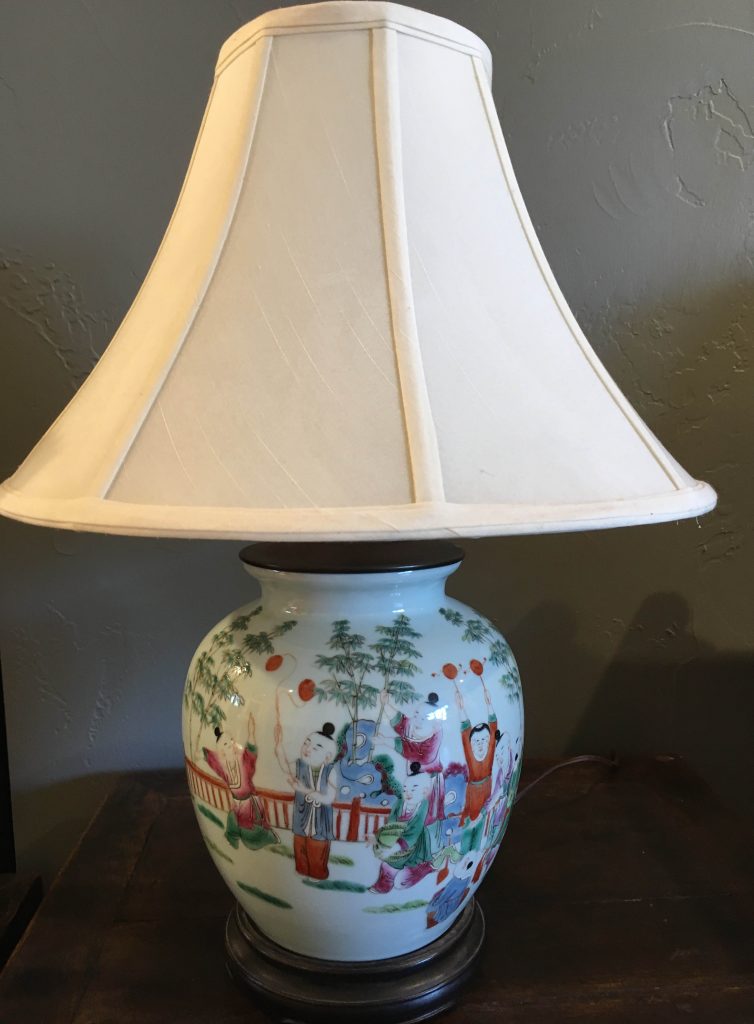 This lamp is a white transparent porcelain glazed vase painted with the “One Hundred Children” theme in Famille-rose enamels.  It is attributed to Emperor Qianlong period (1735-1796) when strong export trade influenced Qing emperors to develop new softer color palettes that suit European taste and demand.

The lamp is unique in the theme selected.  The “One Hundred Children ” theme started in China where it was a Taoist theme.  It became very popular as theme on screens, scrolls, and paintings during the 18th and 19th centuries; however, a painting of this theme on a transparent porcelain glazed vase is rare.  The vase was likely made to be given as a wedding present.  The “One Hundred Children” painting was meant to inspire the bride to conceive.  At that period, the first duty of a wife to her husband and his family was to bear male children.

The painting on the vase depicts boys of Chinese nobility, dressed in Chinese court costumes, engaging in lively games with princely pleasure, in a mansion courtyard showing balustrades, trees, flowers, and exotic rocks.  This vase shows the important new technique of application of pigments developed in palace workshops during that early period.  Instead of the use of glue to build up thick layers of enamel, rue oil was used here to give thinner and more transparent layers, as can be seen on the leaves and stems of the bamboos.  The artist was able to crisply draw the outlines of the animated facial features of the boys, fill in the drawn outlines with soft enamel colors, then highlight each boy’s belt and shoes with thick brush strokes to give a tactile feel.  The theme of noble boys and the majestic background clearly means this vase was given to a family of high status.

In the 1980s the foreign community settling in China took interest in Chinese furniture and enamelware, converting some of them into household decorative and useful items.  This vase was converted into a lamp with old European bronze hardware, standing on a base of ebony wood.  A white archaic character is ‘penciled’ in at the bottom of the wood base, which might be the attempt of the individual putting the lamp together to reproduce a seal mark originally found at the bottom of the vase.  The silk shade is not original.