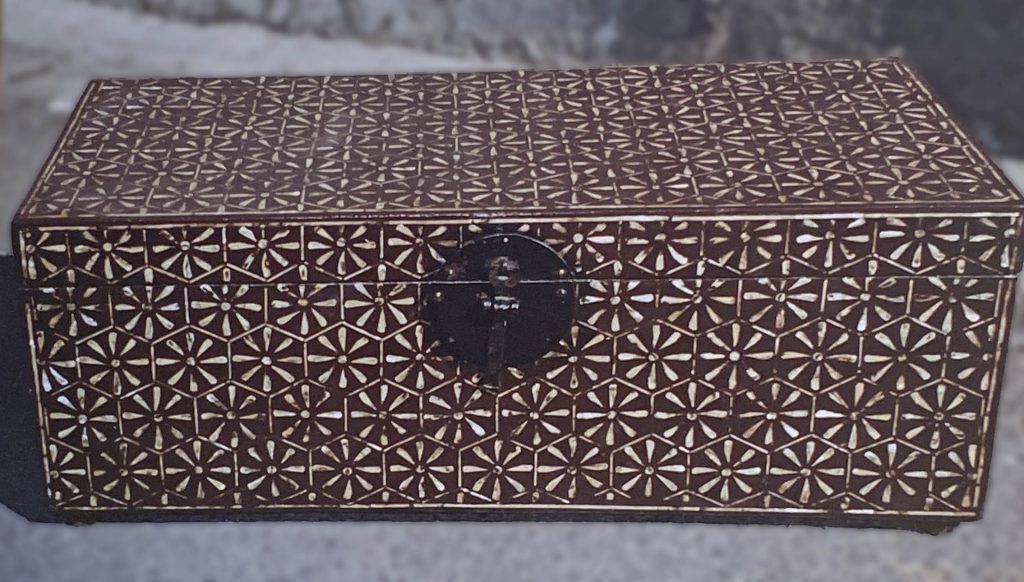 This wedding box (hsem) is elaborately decorated on all sides with mother-of-pearl star-burst design signifying joyous life, happiness and good luck. It was likely made as a wedding present for a bride of the extended royal family, or of the Yangban class (landed aristocracy), as such an expensive item could only be afforded by a member of the upper class. The box would likely be placed on top of an exquisite clothing chest in the ladies’ part of the house where the bride would use it to hold her intimate personal items.

The box is lidded, opening upward on hinges at the back. It has a rectangular lock-plate made of iron, attached to the body of the box by brass-head nails. The box sits on a simple wood block at each corner.

This box was found after the Japanese Occupation by an American missionary doctor when he went to treat the sick and the dying at a political prison colony for the Kingdom of Korea. He was allowed to take away furniture taken there by the exiled as the ruling scholar/official class did not value furniture. For his humanitarian work, the doctor was honored with Korean citizenship, and he lived the rest of his life in Korea. The box was later passed on to a Korean Professor of Korean History and Antiquity who certified this box as rare.