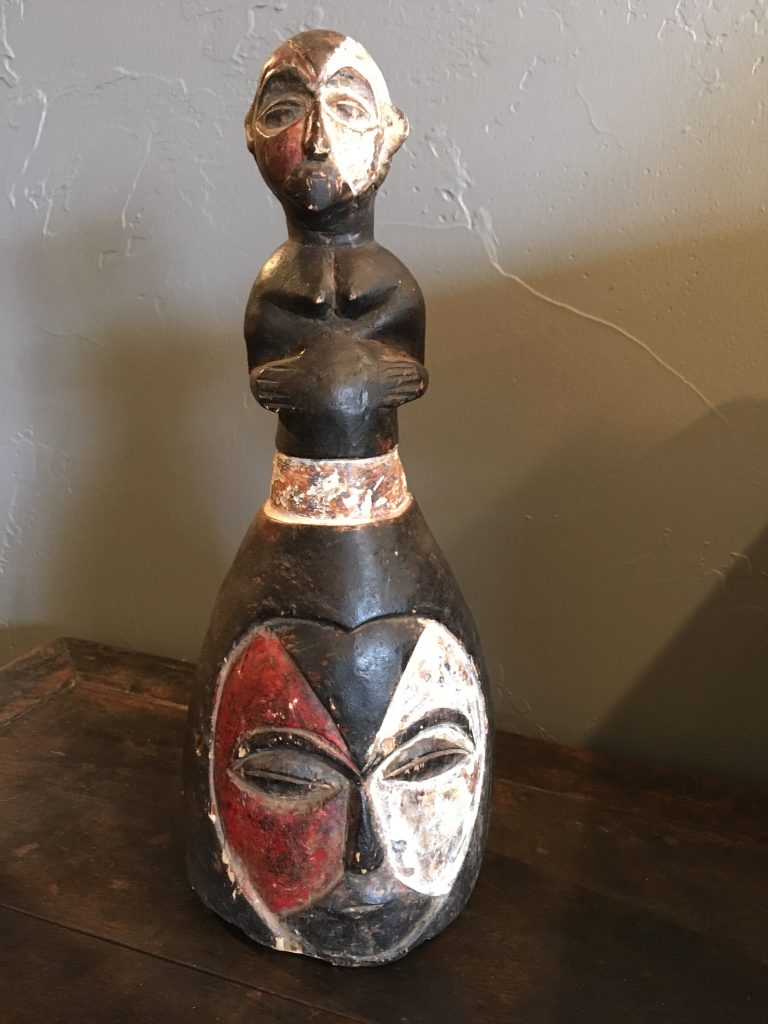 The Pende people of the Democratic Republic of Congo are grouped into numerous groups, the two most important being in Kwilu (Western) and Kasai (Eastern) Pende.  The Pende have a matrilineal culture.  There is no centralized authority but is organized around extended family groups rather than through chiefly authority.  Several clans are consolidated under the rule of a chief whose main role is that of mediator with the ancestors, to communicate with the ancestral spirits during rituals.  The Pende belief that the spirits of their ancestors can positively or negatively influence the quality of their lives.  They create many complex styles of masks, geometric ones as well as naturalistic ones to communicate with particular spirits.

This present mask is a Kwilu mask, which is characterized by the downcast eyes, somber and gloomy facial expression.  It is carved in the shape of a female figure wearing a skirt with a carved face mirroring the carved face on the head, and the presence of a wooden bell suspended inside the skirt.  Both carved faces have a clown-like face with one side colored with red pigment and the other side with white pigment.  The forehead, eyes, eyebrows, nose, mouth and chin are colored black, as is the rest of the body and skirt.  Among many African groups, the color white signifies the spiritual world of the ancestors; red signifies the blood shredded in warfare or childbirth, while black signifies the unknown.  With the red and white colors bisecting the face, it might mean the transformation of life.  This type of mask is known to have been used in ceremonies following a rite of initiation, to represent an important person in Pende society; but although it represents a role in the secular society rather than spirits, it is used to control supernatural force.  The bell no doubt serves to summon the ancestral spirit.

The mask has a crusty patina that gives it evidence of significant age and use.  Many African masks and figures, even ones in museums, are often well under one hundred years old, not old by antique standard (usually over 100 years old), but wood rots and deteriorates in hot and humid jungle environment, so ones truly used by natives in rites the outside world able to recover are rare.

(This mask was bought by a collector who visited Africa often while growing up, staying with relatives and eventually acquiring real estate there.  She ventured into the jungle to buy antique masks and figurines from natives who would only trade with collectors they know and trust and not tourists.  This bell mask is so special that the old woman who owned it was at first very reluctant to part with it.  We feel very lucky to eventually acquire it).