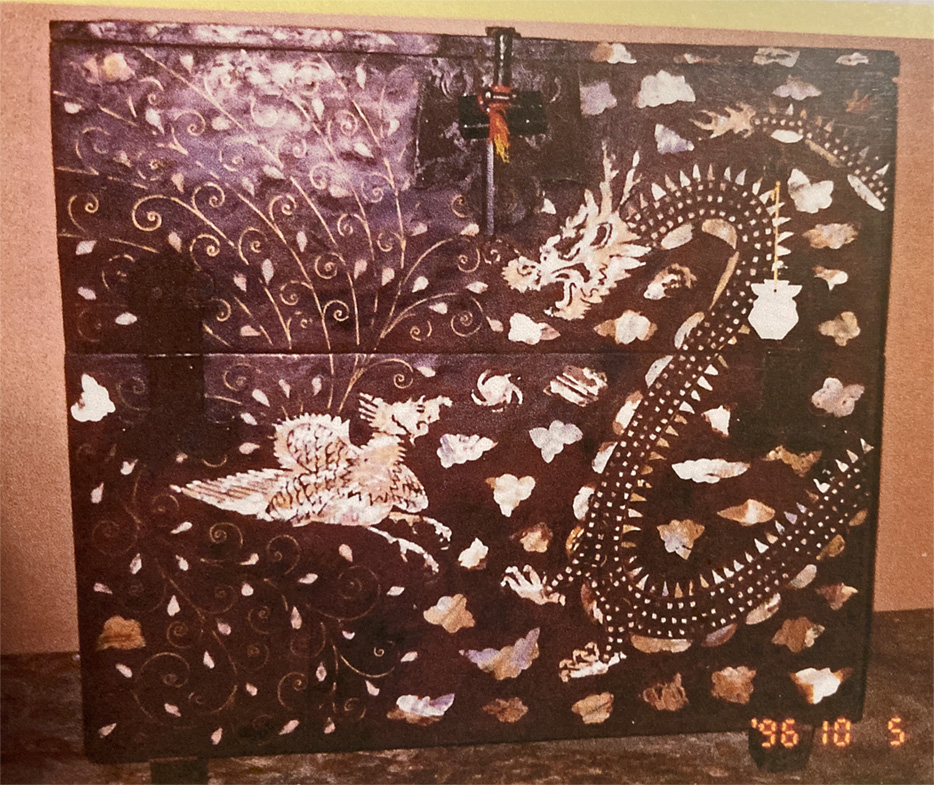 In ancient Korea as well as in China, a five-clawed dragon is the emblem for a king and the use of it was restricted to a member of the royal family.  On this chest, the dragon’s head, claws, skin spikes, and tail-end feathers are inlaid with mother-of-pearl and its long, coiled body with pieces of very rare sharkskin.  With its sinuous body twisting from the front to one side of the chest, then to the top and back to the front, filling this side of the chest, this ferocious-looking dragon symbolizes a strong, majestic king.  Its mate, the phoenix, is shown on the other side of the front panel inlaid brilliantly with mother-of-pearl, with wispy twisted brass-wire representing tail feathers fanning all over the other side of the front, top, and side of the chest.  This royal couple is frolicking among inlaid tortoise-shell clouds, signifying a blissful marriage and long life together.

This chest has a lock-plate with a pair of small magic-fungus motif carved out at the top of the plate and a big one coming out of the lower edge of the plate.  On this plate are two openwork carvings of the “swastika” motif, which has many meanings, among them perfection, harmony, and happiness.  This chest has door hinges in a swallowtail design with the top rounded off like a modified “ruyi” (grant wishes) motif.  Incised within this part of the metalwork is a medallion with the Taoist t’aeguk motif, variant of the yin-yang symbol.  The best-known example of this Taoist-inspired design is on the Korean flag.  The bottom half of this hinge is incised with an urn bearing a flower arrangement signifying eternal harmony.  All these beautiful fittings are wrought from common iron, quite a contrast to the rest of the expensive material used to decorate this majestic chest.  This is a “tribute” to the upper scholar/official class who were adherents of Buddhism and Confucianism and favored the humble iron for its purity and quiet strength.  The chest sits on a removable woodblock under each side of the chest to lift it off the heated ‘ondol’ floor.  The ‘ondol’ heating system was developed in the capital where it was first used in palaces, then quickly spread throughout Korea, becoming standard in upper-class houses by the year 1200.

This chest was found after the Japanese Occupation on Kanghwa Island, a political prison colony for the Kingdom of Korea.  It was recovered by an American missionary doctor who was invited to go there to treat the sick and the dying.  He was allowed to take away any furniture the exiled took there as the ruling Scholar/official class did not care for furniture.  For his humanitarian work, the doctor was honored with Korean citizenship.  He lived the rest of his life in Korea.  This chest was later passed on to a Korean Professor of Korean History and Antiquity who certified this chest as rare.