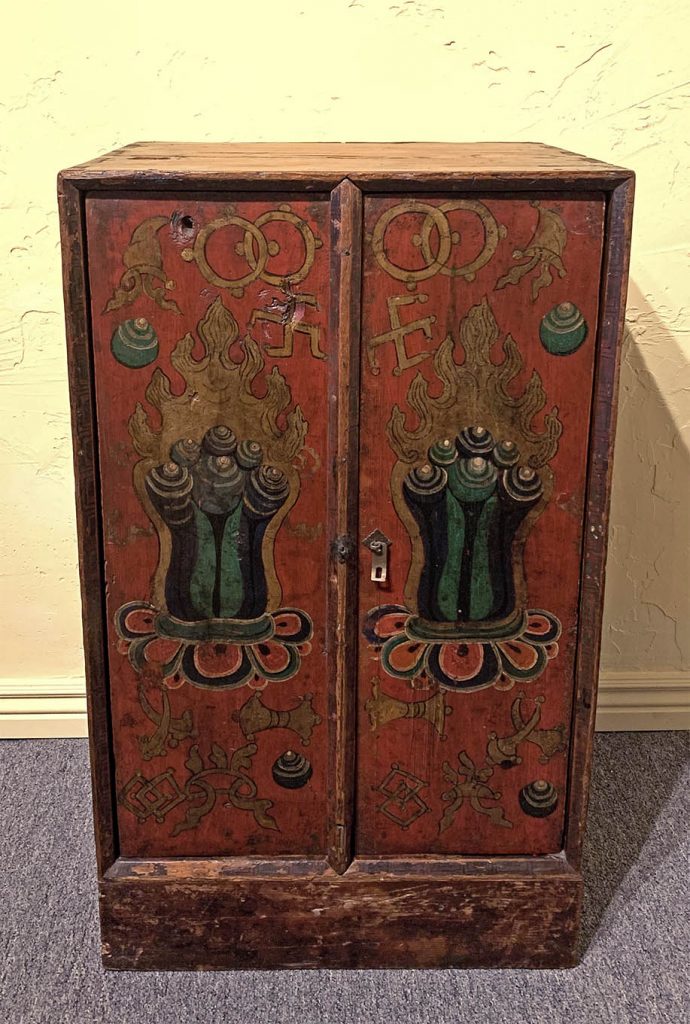 A torgam is a cabinet for storing ritual cakes made by monks as offerings to the deities in ceremonies.  Unlike many monastic torgams with auspicious motifs of fierce-looking deities and animals, skulls and animal skin painted on it to scare off sinners so they would repent, this one has benign symbols of Buddhism, suggesting it was one used in a private home, used in rites attended by a monk.  The rite connected to it would be attended only by the monk although occasionally a family member might be invited to attend.

This torgam has a pair of doors with the overall surface painted red.  It has as centerpiece on each door a bundle of flaming pearls.  This is said to be a characteristic design of chests of the sixteen century and earlier.  Around each flaming jewel are painted some of the Eight Auspicious Symbols and the Seven Precious objects.  Among them are: The Wheels of the Law, the swastika, the pearl, the canopy, the pair of rhinoceros horn beakers, the dorje, the conch shell, the eternal knots and the victory banner.  Together, these symbols mean protecting the Dharma, the teachings of Buddha.  The red mineral pigment on the base has faded in places.  The patina, the primitive locking device, and the rough way it was made, suggest this torgam is a very old piece and is a miracle for it to have survived a cultural revolution.  It is rare and valuable as Tibet has not allowed any of its antiques, especially religious ones, to leave the country.